Why Portugal – the journey of how Eva and Anders, a Swedish couple with extensive career backgrounds both in the public and private sphere, became Lisboetas two years ago. Two years that have met all their expectations and given them even more than they wished for.

It was almost 20 years ago, just before we got married, when we went to Paris for a few days with the goal of making our joint “bucket list”. In one of the last items was the desire of both of us to move abroad again sometime in the future. When the opportunity approached, we decided that the move would be to Nice, France. Everything was ready for the move there when we took a weekend trip to Lisbon 3.5 years ago, and then everything was turned upside down. We fell head over heels, and now we live in the middle of this lovely city. Here there are the districts with their rather diverse cultures, the vibrant city life and the tranquil residential neighbourhoods, the students who create creativity and a pulse, a wonderful and broad cultural life, great restaurants, lovely wine shops and so much more.

It is a relatively simple country to move to. Many parts of the “system” are remarkably similar to those in Sweden, which in itself is no wonder since the countries have been in close contact over the years. The most striking feature, as we experience it, is the openness, curiosity and kindness of the Portuguese people and the total love for sports, football that is. The only thing that can be challenging for a Swede in Portugal is the generally very delayed building processes and a rather impenetrable bureaucracy.

Each year, the World Travel Awards selects a number of winners in travel and tourism. In the European group, Portugal won the award in an impressive number of categories in 2020. Full score for Portugal! And we are not surprised, because all of Portugal offers so many wonderful experiences, which has resulted in tourism being one of the main sources of income for the country. As a consequence, we see that Portugal has been hit extra hard financially by the ongoing pandemic, and as new residents of this wonderful country, we are doing what we can to contribute to the marketing of Portugal in the channels we have together.

Anders and Eva have two children each, and Eva has five grandchildren. Missing the children and grandchildren is the only sad thing about the move to Portugal, and the ongoing pandemic has unfortunately not made it easier to see them. 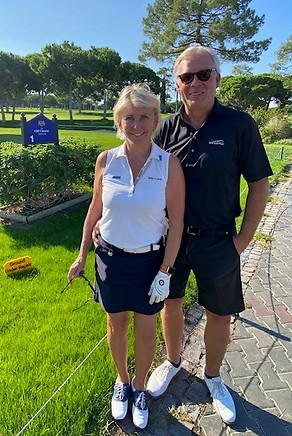 As individuals, we are both active people. We like to play golf, hike out in nature as well as in the city, visit restaurants, travel and visit new places in our new homeland. There is also a great interest in sports where golf, football, tennis and track and field stand out, and last spring we decided to join Benfica football club due to all of the Swedes who played in precisely Benfica.

Anders' career began in the IKEA Group and then moved on to Proffice as the Purchasing and Establishment Manager during Proffice’s period of expansion. Anders started his first company in business relocation twenty years ago, and over the years, Anders' companies have been sold and new ideas have emerged and come to fruition, but all within interior design, IT/technology, remodelling and rental negotiations of new agreements on behalf of customer companies.
After the move to Portugal, Anders has continued to work as a tenant management consultant through his Portuguese company, Ostling Consulting, focusing on the Scandinavian market but with the goal of being able to offer his services in the local market in the future.

Eva's career has provided her with opportunities in both influencing and change management, and she began working early on with opinion-formation and communication. In the end of the 1960s when political discussions reached all the way into the classroom, interest in getting involved and participating and influencing developments emerged. So from the beginning of the 1970s until the middle of the 1990s, Eva had various political assignments in the City of Malmö. After this, during the happy 1980s, Eva started her first company in communications and events, which led to her becoming the Regional Manager of Proffice which was listed on the stock exchange at the time, followed by the Managing Director of Proffice in Denmark and later the Managing Director of Bemanningsföretagen (later Competence Agencies of Sweden) at Almega staffing companies, Regional Manager of the Confederation of Swedish Enterprise in southern Sweden and Managing Director of Visita/Swedish Hospitality Industry for eight years before going to Portugal.

Influencing and change work has been the common thread for Eva and specifically in the labour market, integration and infrastructure. Creating new alternatives and new opportunities is infinitely exciting, and to achieve results, one must find alliance partners.

Back to their current life in Portugal, Eva has become Vice-President of SWEA Portugal, something she finds both an honour and so challenging. SWEA, a worldwide organisation for women with over 7,000 members, where membership provides a unique opportunity to create strong networks, access information and knowledge about both their new or smaller new homeland and also access a variety of activities.

As Vice-President of SWEA, I would like to welcome you, who may not yet be members, and looking forward to meeting you at one of SWEA's activities!