Meet the CLS newest member, Speaking of, who believes that it is about seeing communications as the tool rather than the goal

Stockholm-based Speaking of has become, as of this April, the first public relations and corporate communications agency among the CLS corporate members. Founder and director Sérgio Guimarães holds – besides two nationalities and two languages – a love for intercultural and effective communications.

Since 2016, Speaking of has worked with place branding, e.g. two city districts in Stockholm, the city of Cascais and promoting the brand of Sweden abroad in an official capacity. Among its clients, two Swedish governmental agencies, the governmental offices, real estate developers, two architectural practices, a publicly listed energy company, and an airline.

“I have the good fortune of working in an industry which is creative and innovative and it’s sometimes easy to get carried away by bold advertising campaigns. My co-workers and I love solving problems and keep our eyes on the specific needs of the clients we work with. It’s about seeing communications as a strategic tool, not the goal in itself”, says Sérgio.

Specialized in media relations as well as crisis and reputation management, Speaking of has had critical assignments in corporate communications and goal-focused campaigns, such as managing the digital communications campaign for Stockholm’s bid to become the new host city of the European Medicines Agency.

Though he’ll admit that communicating across borders can lead to misunderstandings or missed marks, Sérgio advocates that focusing on the commonalities between the Portuguese and the Swedes, for instance, is more productive and leads to results.

“I’ve worked a number of years as a media relations manager for the brand of Sweden abroad and met journalists from all over the world. The conditions in which we operate can be dramatically different, but, at the end of the day, our aspirations and life needs tend to be the same”, he adds.

Want to read more about Speaking of and their work? Please visit speakingofpr.se. 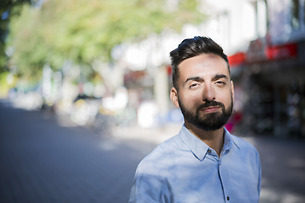 Sérgio Guimarães - Founder/Director at Speaking of