Meet the new Ambassador of POrtugal to Sweden - Sara Martins

CLS is happy to share a recently arrived "message in a bottle", from the new Ambassador of Portugal to Sweden, Sara Martins. The Ambassador with a journey that goes from Maputo to New York, went through various postings in the Portuguese Ministry of Foreign Affairs and finally arrives to Stockholm in September 2020. Read about her view on the similarities between our markets, how she wants to bring Portugal and Sweden even closer... and her passion for Swedish tapwater, enjoy!

Message in a bottle

Firstly, thank you very much for this opportunity to introduce myself to the members of the Swedish-Portuguese Chamber of Commerce as well as to the readers of this newsletter.

I have taken up my duties as Ambassador of Portugal to Sweden since September 2020. It is my first post as Ambassador and the first time I have lived in Sweden, which I had only ever visited twice before. But the country and its standing on the international and european scene were certainly not new to me.

When I was posted at the Embassy of Portugal in Maputo, between 2000 and 2003, I came across the impressive work of the Swedish International Development Cooperation Agency (SIDA). As a consequence, I became familiar with both Sweden’s investment in development cooperation as well as the country’s historic links to the African liberation movements.

I then moved to Portugal’s UN Mission in New York, and I went on to work in human rights and multilateral affairs for over seven years. Sweden was and still is to this day a staunch supporter of multilateralism and the UN agenda on peace and security, sustainable development, and human rights.

And finally, I moved onto European Affairs. I worked in the Portuguese Representation to the EU in Brussels and afterwards, back in Lisbon, in the Prime Minister’s Office and then with the Secretary of State for European Affairs. During this time I had the chance to learn and recognize the Swedish influence in EU affairs and all that we share in common: ambitious climate goals, a free trade agenda, a strong support for innovation, a deep attachment to the European social model, and an active engagement in promoting our fundamental values: democracy, human rights and the rule of law.

My main focus now is bringing Portugal and Sweden closer, particularly in a year where we will have two special events to help us achieve this objective: the Portuguese EU Presidency and the 380th anniversary of the bilateral relations between our two countries. 2020 has been a difficult year, but we must look ahead with renewed optimism and move onwards with the resilience we have gained. 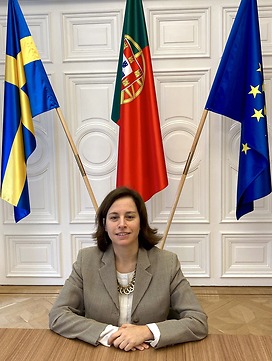 I feel that I come equipped with the necessary knowledge and I count on the support of a dedicated Embassy team, including the AICEP Director and Trade and Economic Counsellor, Carlos Moura. I am acutely aware that our economic bilateral relations are dynamic and full of opportunities, which I hope to help develop over the next years.

In 2009, during the Swedish Presidency of the European Union, I came to Stockholm for a meeting. When I went home, I took a glass bottle of Stockholms Kranvatten with me that was on the meeting table and that I have used, at my desk, throughout all these years. This bottle struck me for two reasons; first, the beautiful clean design, which reminded me of the Portuguese traditional glass craftsmanship; and then the sustainability concept of promoting tap water, which at that time was not yet common, but that I was already particularly aware of because of Portugal’s engagement in the promotion of the right to water as a human right.

So Portugal and Sweden do think alike in many areas. And now that this bottle has found its way back home, I look forward to cooperating with the CLS and its members and eventually meeting you in Sweden or in Portugal.

EMBASSY OF PORTUGAL IN STOCKHOLM